Our Lady of Pompei Catholic Church

Our Lady of Pompei was founded as a parish in 1923 in order to serve the Italian immigrant community in Baltimore. Construction of the church began on January 16, 1923 and was completed the next year; the first mass was held on June 1, 1924. The church was founded by the Vincentian Fathers. The first pastor and founder was Fr. Luigi Scialdone, C.M. (Congregation of the Mission).

After spending 17 years of missionary work in the land of China, Fr. Luigi Scialdone, C.M. came to Highlandtown. The archbishop at the time, Michael J. Curley, appointed Fr. Scialdone pastor of the scattered Italian flock. Archbishop Curley reflects on Fr. Scialdone’s work in his letter of April 7, 1934: "He began his work under the most difficult circumstances.  The Italian flock was scattered. Very little attention had been paid to them."

Our Lady of Pompei quickly became an anchor for the Highlandtown community, and over the next 50 years, Our Lady of Pompei continued to be an anchor. The parish school offered K-12 education and Sunday School. Parishioners enjoyed the feast day celebration and procession, the annual bull roast, and the summer street carnivals, where the best fried dough in town was served!

In the early 1990s, both the parish and the neighborhood were currently experiencing very difficult times. Enrollment in the parish school was declining and families were leaving the city. New realities were setting in - the polarization of the population which consisted of two groups, the very young and the very old, the increased presence of transients, and growing financial difficulties for the parish and the people.

In 2008, in response to the growing Hispanic community, Our Lady of Pompei began its Spanish ministry, offering mass in Spanish. Fr. Luis Cremis joined the parish, from our sister mission, in Peru, operated by Operazione Mato Grosso.  Fr. Cremis assisted with the expanded ministry.  Parish life was reinvigorated!  The parish school combined with the parish school of St. Elizabeth's of Hungary to form Archbishop Borders School. This was a K-8 school administered by the Archdiocese of Baltimore operated in the Our Lady of Pompei school building.

A few years later, the Archbishop Borders School was moved to the recently renovated school building of Sacred Heat of Jesus just up the block.   The sale of the school building was finalized in August 2014.  With the absence of the school hall, he Parish Council started to have discussion of how to best utilize the gymnasium building to its full potential to be the center of church activities.

Our sister mission group, Operation Mato Grosso, sent Fr. Giuliano to Our Lady of Pompei in 2016.  His arrival was in the nick of time, because Fr. Lou entered the hospital for a hip replacement.  Fr. Giuliano is an Italian priest who speaks Spanish (and Italian), and was learning English at the time.  A life-long parishioner commented during the Easter Vigil Mass in 2016, saying, "I am listening to an Italian priest, speaking broken English on the altar.  The church has really come full circle."

During the summer of 2018, the church began a rebuilding campaign discussed and planed for the past few years by the Parish Council.  The campaign was entitled Rebuilding Pompei.  The primary goal is to renovate the aging infrastructure and transform unused church property for parishioners use and for the ongoing mission.  Secondary, we are rebuilding the faith community to be a strong presence in the Highlandtown community for future generations.  In the autumn of 2018, twenty volunteers from Italy, who are part of the Operation Mato Grosso group, arrived at Our Lady of Pompei for three months.  They came to provide renovation assistance as part of the rebuilding campaign.  A group of parishioners invited the volunteers for Thanksgiving dinner so that they could experience an American tradition during their visit.  A new group of volunteers arrived in January 201, for three months, to continue their service with the church's renovations.

A Highlandtown parish since 1923 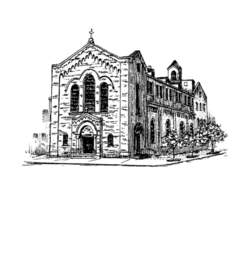